A card game of strategy and luck for dog lovers, astronomers and those who love a little mischief

WHY SPACE and WHY PUPPIES?

Elon Musk recently said “… I can’t think of anything more exciting than going out there and being among the stars”. He’s kinda right, though, I mean if you can why wouldn’t you? So for all of us who can’t go to space until we make our billions, why not play a card game that takes you there for 15-20 mins? That’s longer than Jeff Bezos and Richard Branson spent in space in their super cool aircrafts.

And we get to do it with Space Puppies!

So let's get right into it!

Space Puppies is a fun family card game that depicts the adventures of astrodogs who serve in the space-borne peace-keeping armada of the Su-paw Star Enterprise. They're tasked to bring the planets back to their orbit, time and time again to restore peace and balance in the universe.

That’s right! Space Puppies, together with your help, will go where no dog has gone before. 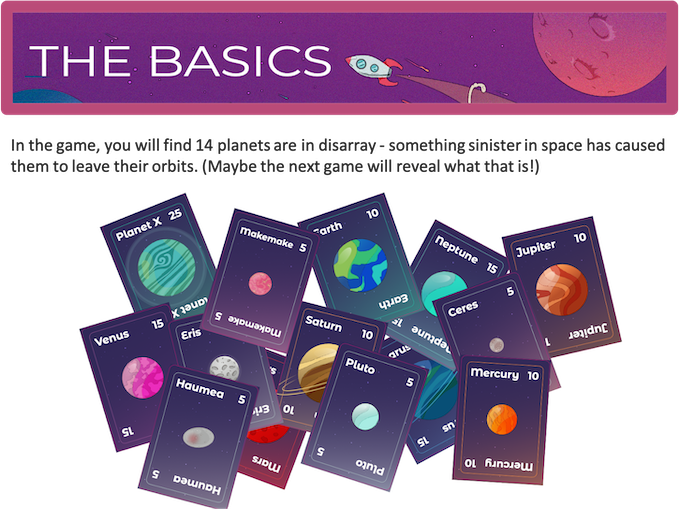 Your job is to collect 3 packs of unique dogs who will save individual planets. A complete pack of dogs will earn you a planet. If playing a points version of the game, collect enough planets to make 40 points. 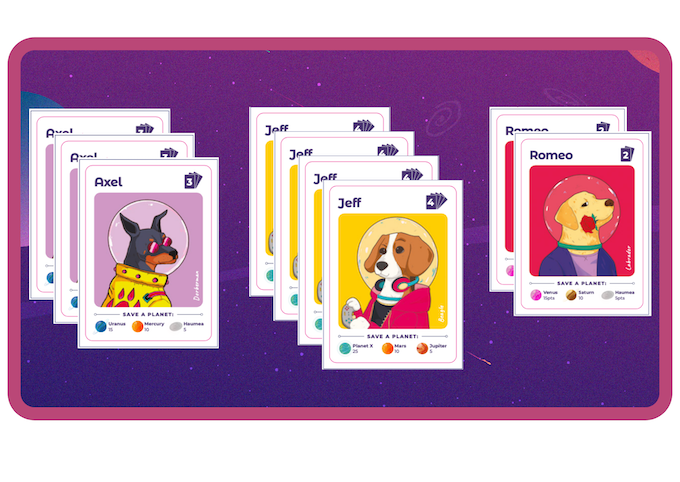 Use ACTION CARDS to help you sabotage your opponent or boost your mission. 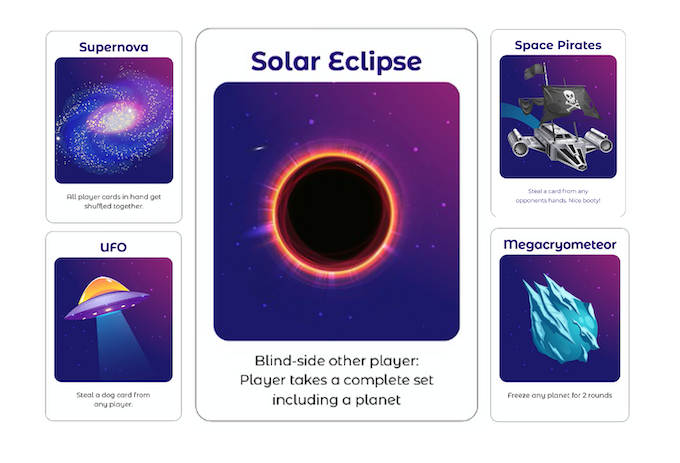 But, watch out, it could all backfire and the course of the game can change if the opponent uses their protection cards. So use them wisely and plan your strategy! 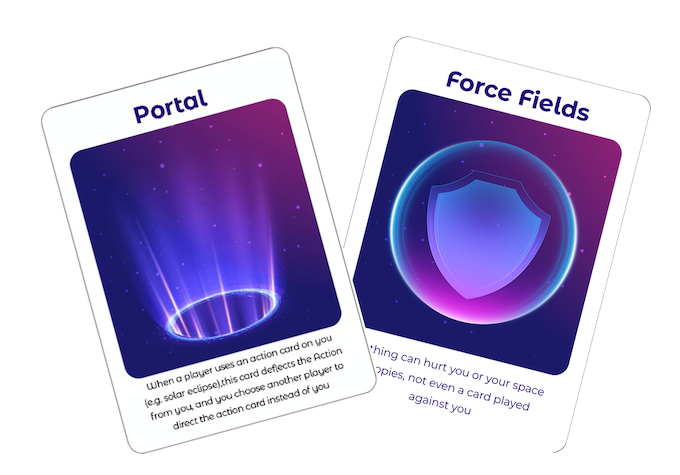 There are 12 unique action cards that will keep you and your kids on your toes throughout the 20 minute game. And then you start all over again, a new adventure to save those planets!

A game of strategy and mischief, designed to bring the family together on a cosy night in or test the strength of relationships! 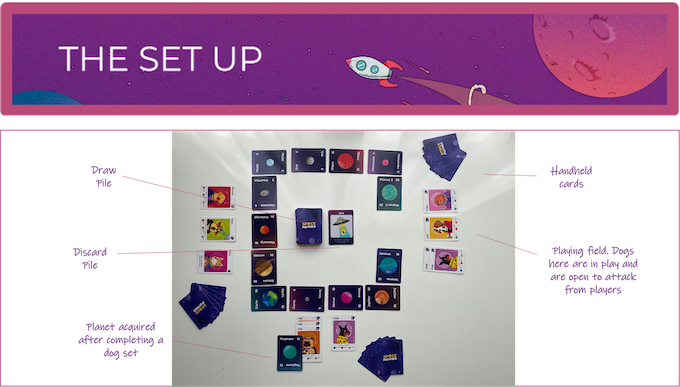 Place all planets, face up, in the middle.

Dealer deals 5 cards to all players. Don’t show your cards to anyone. Rest of pile becomes the draw pile, keeping space for the discard pile next to it. Person with the loudest bark starts.

Play up to two cards at a time. That could mean, start placing dog cards in front of you or play action cards.

Action cards all have a description on them. Play Action cards by placing them in the Discard pile and following the instructions on the card.

When you complete a dog set, pick up a planet that is named on the dog card. If your first choice isn’t available, pick the next one.

Who wants to play? 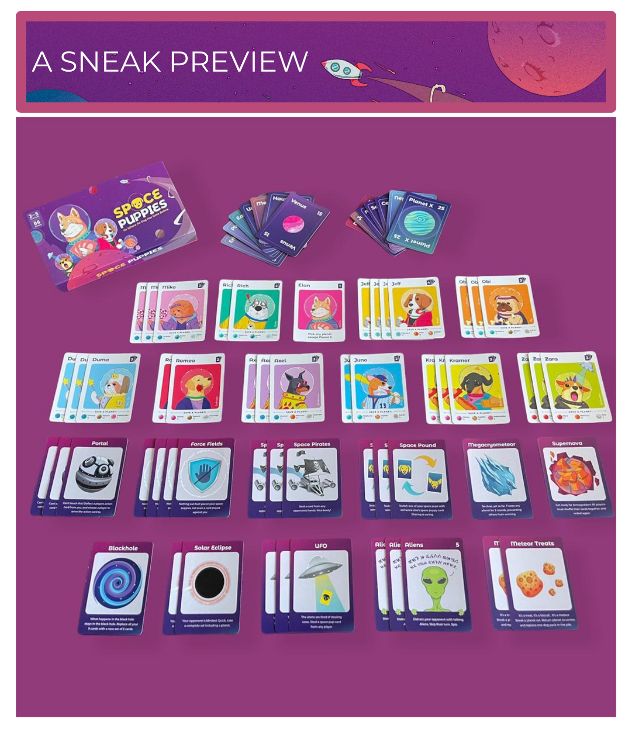 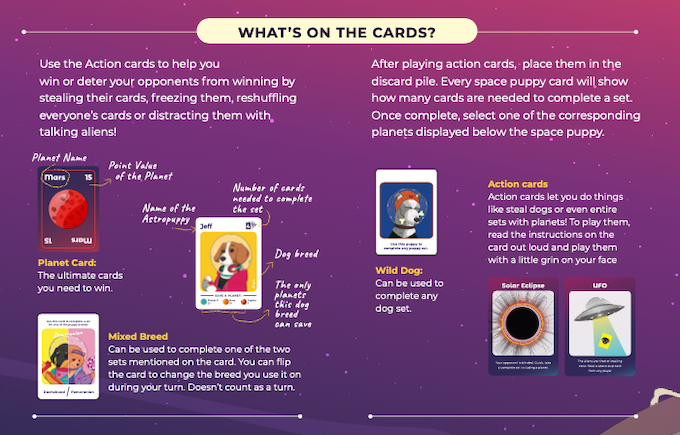 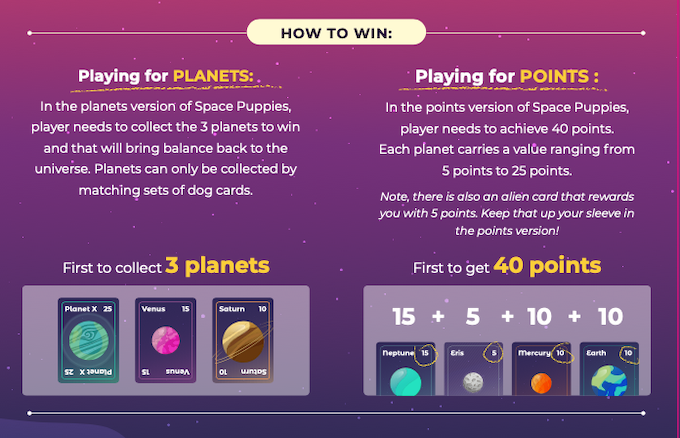 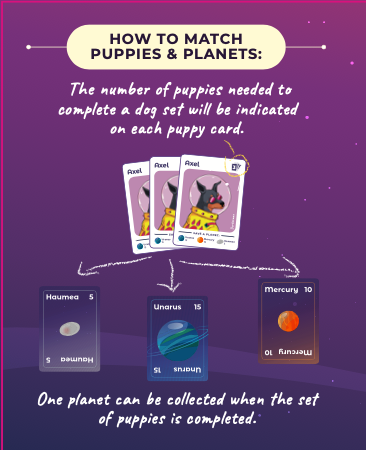